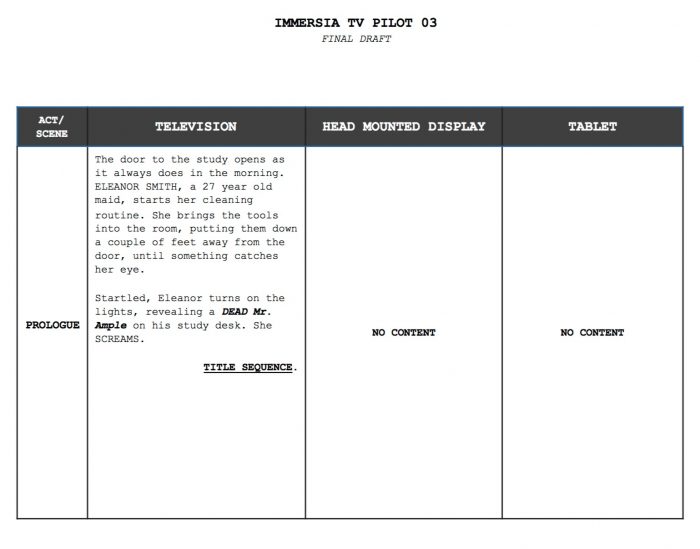 As an aspiring screenwriter and filmmaker myself, having the opportunity to conceive a new narrative experience with the Immersia TV tools was nothing short of exciting, from an artistic standpoint. Being a fast paced, highly creative production house, this is the sort of project that excites us at Lightbox.

In fact, the whole premise and basic conceptual idea for what would be the script for the offline third pilot was something that came to me when we were first working on the first one. Not only were we breaking in new methodology to produce content within this new paradigm, but we also started bouncing off ideas of what this new combination of mediums could possibly allow for.

During IBC, as a part of documents written to make a case for the potential implications of Immersia TV, one in particular resonated strongly with us: if a 2D image, or directive video, on a television could be seen as something objective, could we expand the experience by providing the user with the same narrative, only made subjective? A clear simple example was used, in a very Soviet Cinema School like fashion: if we saw on the TV a child being scolded by his mother for a broken vase, in that isolated event, we, objectively speaking, process the information that he or she broke the vase and now, the mother is livid with anger. This would be the scene shown on the TV, through 2D directive images – objective narrative information. On the upside, what if we took that very same scene, but on a 360º omnidirectional image? What would be the difference?

With a directive image, your eyes are directed towards a specific thing the scene must (or must not) convey. In omnidirectional, the entire area of a certain scene is always open and action is all transparent. With this in mind, let’s take the next example: the same scene, mother scolding a child. Only this time, when we’re in the 360º image, if we look hard enough, maybe we can see the younger brother hiding behind a cupboard with a naughty smile on his face. This not only changes our interpretation of the action, but it also expands the narrative by providing us with we could say is subjective narrative information.

This is the basis from which the script was approached, with the conceptual premise of mixing objective and subjective narratives, expanding the story by means of the different medium’s natural content habitat.

When the script work started, the main issue was to build a synergy between different platforms in terms of narrative. This meant writing cohesively to the strengths of each medium. In order to meet such condition a genre of story had to be chosen having in mind the main conceptual challenge of the pilot. A Whodunnit detective story felt like an appropriate sandbox to play around in, always having in mind the general story experience we wish to create and share with users. This also means that the screenwriting process becomes something akin to looking at three places at once, writing with both hands, and juggling a football, all at the same time. Upon deciding on the overall narrative which to explore in such a format, a decision must be made regarding which medium is better suited to expand the narrative experience.

Essentially, I took my own screenwriting process and adapted it to the immersia paradigm. First, I drafted an outline. After having a clear idea of the structure, a common 2D screenplay is written, just like any teleplay or film script. At this point, only the TV portion of the project is produced, script wise. This serves as a blueprint for the remaining two platforms: head-mounted display (HMD) and second screen (tablet).

On the HMD, we can take advantage of the 360º space and expand the narrative, using the TV content as a starting point. On the second-screen, we focus on interactivity, by tapping into the tactile dimension of the tablet. But what does this mean in terms of the actual script and its creation process?

The first step is to create a traditional screenplay that will be the base from which we work. The second however, is where it gets interesting: we needed a way to view all platforms, their content and interactions simultaneously, in order to have a general view of the entire narrative arc and experience. This resulted in a three column grid-like document that allowed that. 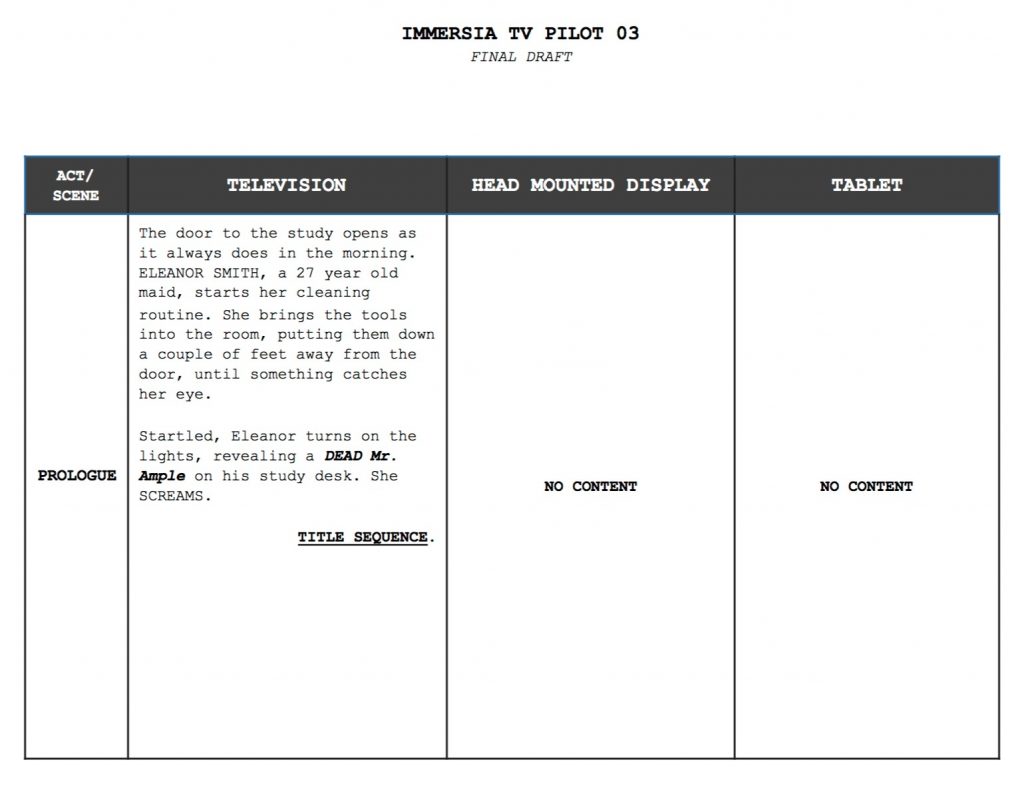 Vertically, I track the time of action and it’s chronological order: this happens, then this and that, 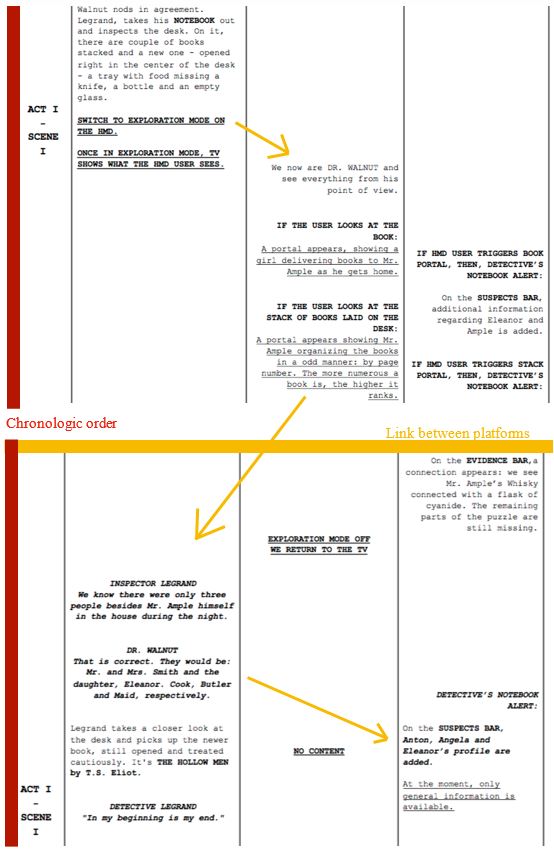 and so on  and so forth… Horizontally, I establish the connection between platforms:

The main idea behind this organization is to travel between columns, from content to content. Things could get very complicated when it came to pre-production and planning, despite all the experience we had in making pilot 01. However, there is a big difference between the two pilots: in the first one, content was continuously synchronized (that was its basic conceptual premise) across all platforms. Pilot 03 is a step up in that regard: we designed an experience that flows between devices not requiring content to be synchronized. This seemingly small change opens up new possibilities for the production process: from prep to post, there can be a separate planning  of what to shoot – one for directive, another for 360º – meaning that while in production we can film by type of footage we want to capture. As a final result, post-production, in particular the editing, becomes simpler in its structure and work methodology on the directive side, while becoming much more complex when it comes to 360º and interactivity.

The process of creating a script from which it would be possible to build a narrative preview of the interaction and synergy between the different devices, was an entirely new one. As an almost blank canvas of narrative possibilities such as this one, mixing 2D with VR and interactive touch, would most likely benefit from high profile industry level screenwriters and filmmakers, from all the around the world, to experiment with the Immersia TV paradigm. Only by experimentation, failure, repetition, failure, repetition, success – the methodology of scientists and artists – can we truly bring forth something new and unique.