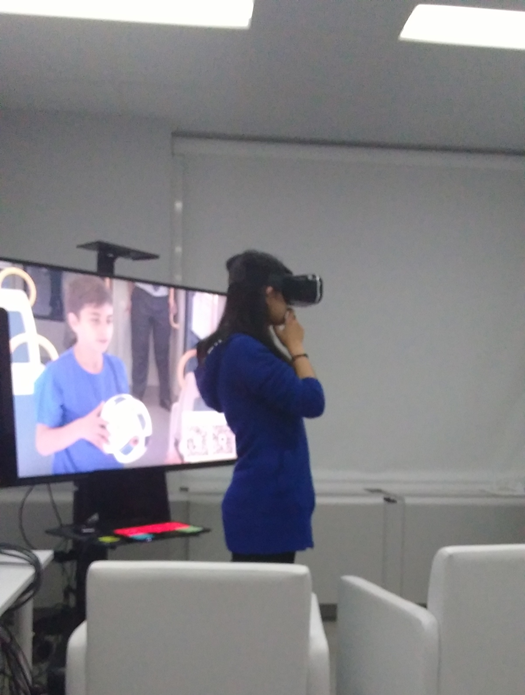 Today, people often watch TV at home using more than one device at the same time, such as a smartphones or tablets. This creates new opportunities for broadcasters to engage with their audience. In the ImmersiaTV project, we use these extra devices to create omnidirectional virtual reality (VR) video experiences. Viewers could use a Virtual Reality head-mounted display (HMD) to explore the content in 360° or to watch additional content related to the TV-broadcast in VR. Can you imagine a future where you watch a regular TV broadcast in combination with a VR headset and other second screens in order to feel more immersed in the TV broadcast? An ImmersiaTV study with end-users reveals that omnidirectional video can make viewers more immersed compared to regular TV (‘You’re in the story!’) if the experience is designed well and provides an added value for the viewers.

We created a documentary that can be viewed simultaneously on a regular TV-set and on immersive displays (a VR headset and tablet) and invited 57 people to come and watch the documentary in media labs at the Catholic University of Porto in Portugal and the Vrije Universiteit Brussel in Belgium. The documentary shows the story of David, a young Portuguese athlete who joined FC Porto’s football school to pursue his dream of becoming a successful football player. After the seeing the documentary on the different devices, each participant was interviewed. The goal of these user studies was to explore the end-user viewing experience across the different devices, the social aspects of this viewing experience and the expectations of TV-users towards VR in general.

The omnidirectional video experience was considered a very unique and fun experience. The participants liked to be in control of choosing in what direction to look and be able to explore the surroundings of the scenes themselves using the VR headset and tablet. Being ‘in the image’ creates a higher feeling of immersion or involvement with the content. However, at the same time, omnidirectional video can also distract viewers and as a consequence decrease involvement. Instead of being in the story, some viewers reported to get lost in the story as there was just ‘too much to watch’. There is a fear of missing out on important actions while using the tablet and VR headset. In the multi-device set-up, the TV broadcast was used as a guide to know what to focus on. A balance needs to be found between free and directed viewing. Audio and visual cues in the image should guide the viewer on when there is an added value to explore the content with the tablet and VR headset and where to look with the different devices. In general, during action scenes, the participants said to prefer to watch the TV broadcast, while during other triggered scenes (e.g right after an action scene, during ‘slower’ moments in the story) they’re keen on exploring the omnidirectional video. Most participants said it would be nices to use this kind of set-up at home in the future on special occasions. However, it is important that the offered interaction provides some kind of added value compared to the regular TV-experience.

Or are you curious to experience VR yourself? Would you like to watch future VR content created in the ImmersiaTV project? Send an email to paulien.coppens@imec.be  and we’ll keep you informed about our demos.