In relatively short live action VR film viewers can experience the new ways of entertainment by immersing into the story. No longer limited to the role of guided statist the viewer can become a part of the action. While he still cannot move freely inside he movie the ability to see “more” than traditional TV allows filling like “being there” with a great level of reality.

This short film also demonstrates the additional complexity that VR workflow introduces. For example, viewer can be lost inside VR scene and miss the important bit. This can be seen at the beginning of the movie when default position of the camera shows the “falling stars” and start descending. It is quite natural to follow with your eyes to the trajectory and turn to see where they will fall.

But the real action will happen right in from of you (one of meteorites hits the building) and you will miss it. This can be thought as a “false guide”, as with proper usage of small movements or sounds in the scene creator of the movie still can help viewers choosing the “right” direction to look at.

Also a lot of scenes in the film are shot in a way when you have to choose small part to look at while something happens simultaneously in other ones. For example, the scene with a policeman hitting the alien with a car. VR camera is located between the car and an alien so you can either observe policeman getting out and trying to get situation under control or an alien growing in size and becoming a real danger. Being there you could step out and see both at the same time. But VR is close to reality but still not there… 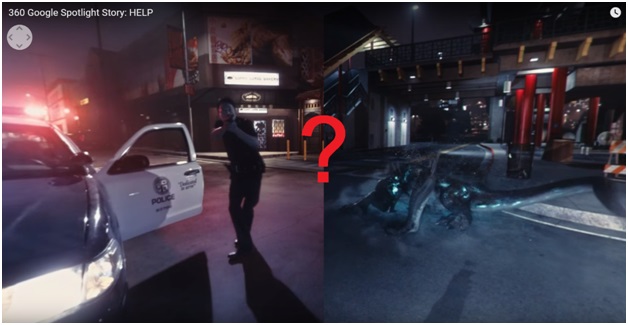 There are a lot of small and large things that can be learned from this movie (hiding the filming crew, having all actors to act simultaneously as all of them are always visible, carefully preparing the scenes, removing stitching artefacts, etc).

Below, you can see the video.